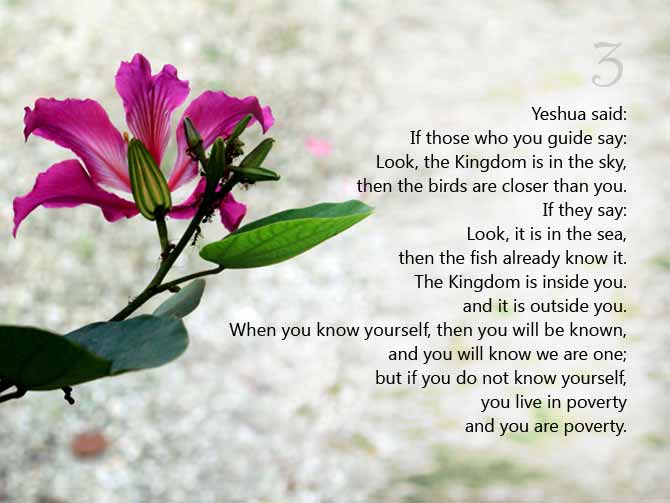 When the word ‘hidden’ is used, an impression seems to be given that there is something awaiting me to reclaim. There is nothing in specific for me to finally arrive at except the culmination of understanding of what entails in my seeking. If ‘what is revealed’ is found at the end point of the journey, then ‘what is understood’ is found in the entire process – recognizing the beginning cause of how the end arrived – the full spectrum of the process. In other words, there isnothing more beyond the end and beginning – not nothing as “without result” but rather nothing as in no-thing. Kingdom, synonymous to Enlightenment, Heaven, or God is not a place for me to arrive at, except a realization or an awakening to what is. The closest example to depict this metaphor is the awakening from a dream, from maya, or illusion. Nothing actually occurred though in the dream everything seems so real and time based. The awakening is realizing the dream of its beginning till the end as unreal, as not in existence.

In the egoic sense whenever a journey is taken there must arrived a destination that comes in a form of a place. It has to be something tangible to make me feel that the journey is worth the while. In the spiritual journey, the destination is the journey itself – it is the culmination of wisdom arising from understanding how the end is the cause at the beginning and the beginning is the cause that caused the end. Recognizing the process of the beginning of the cause that leads to the end of the effect is the gift of what is being revealed. Beyond this, there is nothing to arrive at, as in a place.

Beyond is to mean outside the limit and yet inclusive of it. To exclude the limit is to deem beyond limiting, which is another limit itself. Thus beyond is to mean eternity – all encompassing, infinite, unconditioned, unborn, uncreated. Thus Kingdom is not somewhere or a place to go to. And obviously, it could not be found in this existence as “to exist” is to mean a space for me to be. Sky, earth or even sea are places conjured by existence, by the mind.

The Kingdom is inside you and outside you is to mean beyond “you”. The Kingdom has nothing to do with “you” or anything the “you” can perceive – thus it is not some kind of appearance separated from you. “When you know yourself” – when you finally realized the Kingdom for yourself, you will know exactly who you really are – that “you” will be known.

Through that experience of realizing the Kingdom, the meaning of separation dissolves, as what makes separation possible is the “I-ness” – where there is “I”, there is surely another. That Kingdom has neither the illusionary you or me in it except a realization – upon coming out from it – that the meaning of separation is an illusion created by delusion. “We are one” no longer holds a conceptual meaning but rather a living experience only to be found in the Kingdom.

So long as I have not experienced what the Kingdom is, I am living my entire life in a state of dream, of illusion; unaware that who and what “I” am, is just a projection of a denial or ignorance I am not recognizing. I will not know who “I” am and thus live a life blindly without seeing the richness of the Kingdom. Hence I live in poverty, being poverty myself, for the “I” is empty, devoid of substance, only an illusion.