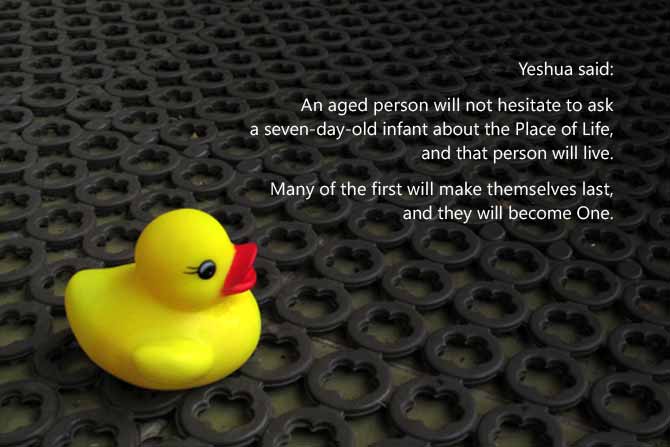 As an infant entering into the world, there is not much possibility of choices – probably nil – except to observe and mimic what comes to his or her space. In adjusting his or herself to a new environment, the infant may take a little while to get in-tuned where his or her first few days may be much of a slumber. The digit seven has always remained a mystical number in many faiths and in esotheric teachings, where seven represents spirituality. My personal opinion is that a seven-day-old infant is chosen as a metaphor of a relative state prior to the mimicking of egoic processes that are found in the entire human existence commencing from the unconscious patterns lodged within parents.

As a child, our first intimate communication and trust are with parents. Parents, as in anyone else who has yet to arrive beyond the world, are in constant accumulation of denials and projections, a state that is created through the veil of delusion. Lessons of blame, upset, fear, guilt, punishment, shame and lots more uncountable egoic stuffs are abound. Rarely, expressions of true love are shown. The so-called “love” showered by parents are limited within the domain of specialness and protection, which by nature are each in the mode of defence and attack. It is not about seeing wrongness in our parents but rather an undeniable fact that all of us carry throughout our lifetime when wisdom is not something that humanity advocate. Not the wisdom of the world, but rather the wisdom of recognizing the state of spirit or ego found in the mind. Another word for it is purity or defilement.

From parents, we move on to picking up unconscious conditionings from our siblings, relatives, culture, friends, education, economy, news, relationship, and even religion – indeed a massive accumulation of egoic dis-order. It is of no wonder our personality is from the root word persona (Latin: mask). We mask ourselves so gravely that we have forgotten who we really are.

Thus to return to our innocence and purity again, the metaphor of asking a seven-year-old infant is given, to mean coming back to the beginning of time, to the cause of it. It is about coming back to Life, as opposing to lifelessness behind the shadow of masks.  We are not merely aging biologically, but also weaken by the egoic patterns, digging our graves deeper. Thus the phrase “do not hesitate” is to mean urgency to inquire the way out of this delusion.

When we learn from the one who has skilled himself in transcending the mind or even in the process of doing so, we may observe the similar pattern of peacefulness and innocence of a “seven-year-old infant”. They are the teachers who are pointing us towards the undoing of the ego, the ending of the cycle of birth and death, and the going beyond the world.

The source of each ego is always the mind and to keep coming back to the cause is to bring ourselves to the “first”. Through the undoing of the ego via the process of “forgiving others for what they have not done”, we end each conditionality that binds us away from freedom. For by facing what is in us, nothing can be hidden. And for those who conscientiously put the teachings into practice, consistently working on the cause instead on the effect, will eventually see the end of each effect, and thus the first will make themselves the last – the ending of the causal relationship of cause and effect that leads one to total freedom, from separation to One.