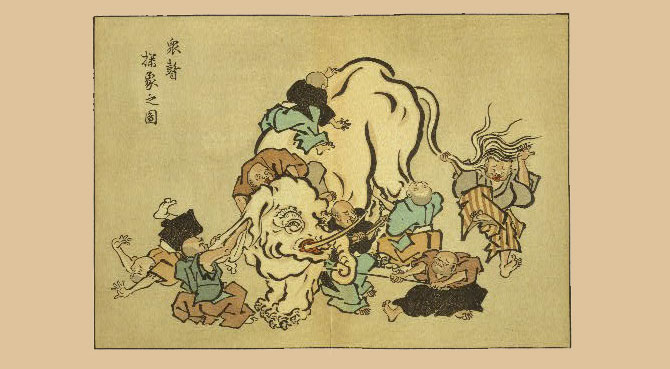 Elephant and the blind men

Every teaching that comes into my space is not for me to protect but to realize, and in that realization is the teaching protected. The teaching is not for me to keep but only as a tool to use. The mere act of keeping translates in me my fear of it being attacked and hence the need to defend it. As I defend, as in protect what I thought needs to be protected, I am unknowingly attacking what I am protecting, whilst in reality, the teaching needs none of my protection. Hence my so-called good intention, born out of ignorance, unknowingly does more harm to the teaching than prolonging its sanctity by attacking its existence, making the teaching vulnerable to the world.

Not that the teaching loses its essence but rather the essence is blocked by the illusion of fear and with that the teaching is no longer seen in its truth but as false under the pretence of fear. And since this reality is not seen, what is false will be taken as truth. Hence, the drama of ownership of one’s faith and dispute over others.

The teachings of each great teacher are effects of what they had personally realized put into words to convey their personal realization. It is by no means meant to be protected for how could it be possible for a worldling who has yet to realize protect what is being realized? It equates to an act of hiding what one does not know what to hide.

Each teaching is not meant to be infused but rather to be reflected upon intelligently and put into practice. A discussion on the relevant topic thus puts one in an advantage as that brings the mind to see the teaching in a different perspective. It is always the case of we only know what we know and thus if we do not share what we understand we could only be understanding from our point of view which may or may not necessary be true. Until our wisdom comes into full fruition of which needs no one to confirm its arising, we have no other choice except to share our experiences with a knowledgeable, if not realized person. Even then we have to muster whatever little wisdom we have to accept or to question what is being discussed or shared, without any reason of rejection but to put it into litmus test and see its resilient over the test of time.

Herein lies the fine line of deception – to reject others’ opinion of the teaching is to deem one is holding steadfastly to his view of what he thinks is right – which is a form of protection but not realization. For when one truly realizes, there is only a sharing of truth and no reason for defense; and to accept what other opines without inner inquiry is to deem one being led into blind faith. Both are extreme by nature.

The wise way of a spiritual pilgrim will be like how my kindred friend puts it – if what she hears is not to her level of understanding, she will not object but to have an open mind about it until she self-realized it for herself whether what is being said is true or not. In this way she does not block herself from seeing the teaching narrowly.

The demand of the teachings requires that we take nothing for granted. Only through inner inquiry and self realization that the teaching becomes self evidence within us. The teachings itself now takes on the form of a living spirit, a continuation of what has being realized from those trodden in the past. It is no longer separate and hence no real external protection is required as it has been internally protected.

2 Replies to “Waking up to each Teaching”