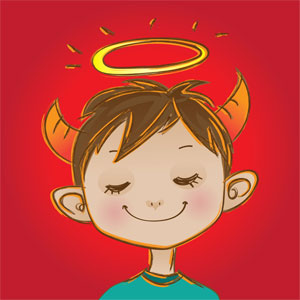 Take for instance, the statement “why am I so stupid” – at that moment when this thought comes into existence, we believe entirely in it, else we wouldn’t have that thought in the first place. We rightfully believe we are stupid, from what we perceive of something done “wrong” – a judgment that can only arise when it is done, not during the doing itself. It is just an idea but yet that idea is right and true to us.

There is no one idea in our system that we see as wrongful even if we see it as wrong upon ourselves. For example, if I think “I shouldn’t have done that in the first place” – a wrongness we make upon ourselves – we see that as a rightful thought to have. We beat ourselves up simply because we think it is right to judge ourselves. Get what I mean? Whether it is right or wrong we are constantly making it right in our space. We seldom see both right and wrong as entirely wrong, as in wisdom seeing incorrectness in perception.

When wisdom is unavailable, ideas that pop-up are constantly righteous, until wisdom interrupts. Just awhile ago I was having a conversation with my beloved friend who mentioned that she felt guilty for a perception she was having over a thought and out of the sudden in that presiding moment, she realized it was just a thought and that freed her from her guilt. Without wisdom she would have felt terrible for what she was thinking as she entirely bought into what she was experiencing – it was real and true to her – and hence she was righteous about it and made herself guilty. But with wisdom kicking in, the guilt simply diminished – guilt detached from her instead of her trying to detach from it. To be more accurate, attachment to the thought arises simply because of wrong perception and detachment arises because of right perception. Both attachment and detachment are simply effects of ignorance and wisdom.

If we are not aware that the mind is constantly making every idea right, we will constantly see the world as wrong. For right and wrong have to come together as opposites that are inseparable. That’s how pride comes into existence, be it inferiority, superiority or equality. When you buy into my idea, we are both equal. When my idea is right in my perception as compared to yours, I am superior. And when my idea is wrong, which I entirely believe as right, I will feel inferior. That is how silly the mind game is. Only by seeing its meaninglessness, frivolous and trappings are we able to come into freedom from its bondage. Before that we will be playing the delusional game of being right all the time.