Life is not a problem to be solved;
it is an adventure to be lived. 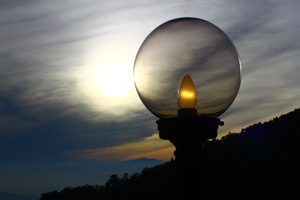 I came across the above sentence while reading The Heart by John Eldredge. He is indeed a true practitioner at heart. I have for many instances came across such similar statements over and over again but did not see how they relate to my practice until my last encounter with my meditation teacher which took place eight years ago. As I read this word aloud today, I am amused that how a little tweak to my perception made a huge difference to the way I approach the meditation system. And thinking about it, it seems to reconfirm in me that the entire world movement is a constant fear based attitude, seldom from the space of love.

My teacher talked so much about right attitude and being new to his system, I found it a little strange. I had been on another system for at least twenty over years and during that time, meditation is constantly a chore to work on as it is about problem solving and seeing wrongness out there or in here that needs to be fixed. It is about constant looking out for defilements, a word coined in the Buddhist practice to mean taints that intrude the mind. Words such as defilements, taints, intrusions – already defined in me something is wrong somewhere. Probably it is in the translation, I am not sure; but when I started to explore the secret teachings of Jesus, I am surprised the words used were pretty different though both teachings were talking of the same thing – the mind that needs to be transcended. Words like errors, mistakes, missing the mark were frequently used to denote that it is just a misperception on our part overlooking what is obvious. And when we direct it correctly again, what is misperceived becomes right perception, hence freeing us from ignorance.

And that is what attitude is. In fact the journey of joy or fear is all based on attitude. My experience can be viewed as a problem or as something I have not understood. Both will give a different approach in my response. The former makes me try to resolve it from the point of view of fixing what is wrong here and as such it has fear as its base. The latter, an inquiring mind, makes me learn to understand what is going on here which I am not seeing.

The end result of both may be similar. I use the word “may be” simply because from my own personal observation and experience, not many finally arrive at its end. Yes, the issue may be addressed, but the experience that comes out of that can be hardness or softness of mind. But in many cases, due to wrong approach that is fear based, having wisdom as its end is practically nil.

My teacher’s questioning of my experiences, or for that matter, of anyone, is towards understanding. He asks, not to belittle us, but to encourage us to having a right approach towards what we experience. Many a times, when we share our experiences with him during retreats, it is so obvious that the questions that come from us are from the direction of wanting to get a quick fix out of the issue. It is like calling out loud to the teacher to fix the problem instead of seeking clarity to what am I not learning here. And as I watch my mind more and more I seem to understand that it is in our system to fix things up rather than to understand it. Could it be our education system that has moulded us to translate the way we look at anything, which includes religion?

It is a sad state of affair as without seeing the contrast of both, one can be easily led into unnecessary deepening of pain and suffering. The more I understand the mind, the more the teachings of great masters, irrelevant which religion they are labelled onto and irrespective what words or meaning used, becomes clear and direct.

One Reply to “A Tweak of Attitude Changes Perception”