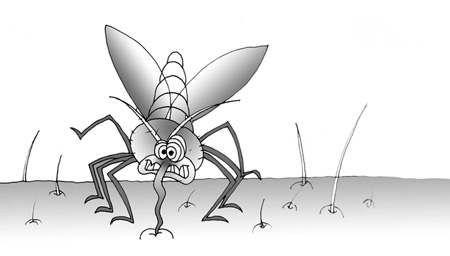 Imagine you have an itch on your skin due to an assumed mosquito bite. Grumbling and agitated by the itch, you move your hands towards it and start scratching incessantly while at the same time search for the darn mosquito at the wrath of your merciless desire to annihilate it. Right at that moment, if you had bothered to notice, there is a relationship going on. In fact, a very intimate one moment – you and your mosquito. Yes, that is what it is. Whatever you experience at any one moment in time is your relationship to whatever is there. Yet, let us dissect that relationship further and explore whether there is a deeper relationship beneath it that you may not be aware of.

Putting aside the mosquito image, what is left is the itch that is compelling you to scratch. The dislike of that itch is what you are relating to at that moment. That is a more closer-to-reality relationship that you are having rather than with the mosquito. In relative, your attention is more towards resolving the itch rather than the mosquito. Which is more important at that point – scratch or search for the mosquito? I am not saying that the mosquito is not in the equation of your itch, but rather the itch is what you wish to end or avoid, if possible. And since you can’t have that immediately, and it gets into your nerve to scratch harder to end the itchiness with the target of blame going to the mosquito.

Yet surprisingly, the itch is in fact not the actual closer-to-reality relationship. Like an onion being peeled, another layer comes into attention. If I were to invite you to temporarily give up the need to scratch just for a while, what will you be faced? Unbearable-ness, I am certain. It is the unbearable-ness that you can’t handle that makes you stretch out your finger to scratch. Now, you have come a long way in noticing what is actually going on. It is about you and your unbearable-ness. From not being able to bear, which is your threshold of discomfort, you have gone as far as making the mosquito responsible for it. How would the mosquito know it has hurt you, except to feed itself when it is hungry? Yet, you labelled it as biting (the mosquito is toothless!) or attacking you.

Could you have imagined the mosquito is actually not exactly what you are relating with but in reality your unbearable-ness of the itchiness? And when you do not notice that, the mosquito becomes your victim of circumstances. Your unbearable-ness has nothing at all to do with the mosquito – if you are ready for that truth! Consider a moment an image of a hunger stricken child in Africa with flies all over his face. Does the child consider the flies a problem and try shooing it away? What I am conveying is that if there is no underlying issue with unbearable-ness, the mosquito will not at all be the attention of your distraction.

But let’s move beyond unbearable-ness and explore what is beneath it. It must surely be about our level of tolerance that brought about the threshold of discomfort. Yet, the level of tolerance can be stretched if we were to give ourselves the effort or patience to face a little bit more. But usually we don’t. Killing the mosquito or scratching the itch will be a better and faster way of getting rid of our discomfort rather than facing it. Rarely do we take full responsibility of it – and it has much to do with our latent attitude of survival – giving in to fear instead of developing love. Imagine if it is a human that you dislike – will you go to the extent of murdering, like killing the mosquito? I would choose to believe that you will not go to that extent. Then what course of action would you take next? Predictably, you either move away timidly or you impose intimidation onto the subject. Whichever way, you are introducing fear as your way of life. Because of that, you may never see a truer reality as in beyond the story of the mosquito.  As you play the game of blame or attack, you will never get a chance to realise the delusional construct that revolves around your experience.

Your attitude lies the key to your truer relationship – the only relationship that is ultimately true. The idea beneath that attitude is what moves you to take the course of action – either one that saves the world, or hurts it. If you are conscious, you may even notice tolerance is not loving. Wholeheartedness acceptance may be the direction. Whatever it is, it is a matter of whether you are keen to seek the truth and nothing else but the truth, or drown yourself in the ocean of deception. This is your only choice albeit there is no right and wrong in either. The past is gone and the future yet to arrive. Your Now is the only potential given to you to realise a reality that is seldom known. The Now cannot be robbed from you. It is offered and re-offered to you until you come to a fullness of realisation. And until that happens, the nightmare of delusion continues … there is only you and your ideas, nothing further than that.