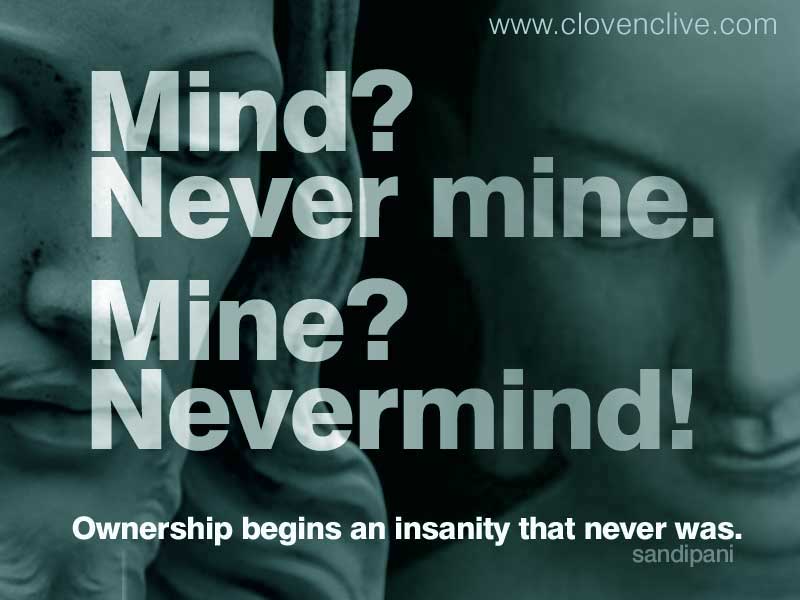 MIND is not an easy topic to talk about due to its intangible and non-existential nature yet paradoxically it is the mind that gives meaning of existence, very real. A good analogy to represent the mind is the sky. When we look above us, the sky is always obvious. Yet, the sky though able to be seen, is not “something” that can be arrived at. Simply because the sky is not a thing. It cannot be arrived no matter how far we try travelling to reach it, yet it seems to cover our planet wherever we are. In the same way, there is no one moment we are out of the mind. Not even during sleep or death! It is seemingly looming around in the now, taking charge of our moments without fail yet it is not easy to place a finger over it and say – Ha! Caught you!

The mind in reality is not “here” per se as it is not something that is in place. It can be felt, no doubt about it, but non-local. Strange, isn’t it? Just as the sky seems to be overseeing, making us feel as if we are in some kind of an enclosure, similarly our mind too at times makes us feel trapped, so much so that we just want to get out from it. Yet getting out was never the question as we were never trapped at all in the first place, except a kind of illusion at play.

MINE – And that leads to this word that always seems to be in existence. The mind is not something that can be owned as it was never a thing at all. If the mind can be represented by the sky, then conveniently “mine” can be exampled as clouds.

Clouds seen from a far, looks solid and real, and at times threatening with its darkness that overwhelms the sky. Yet, when we are above in a plane, looking at it, the clouds is not something that is solid or even touchable. It can be seen, yet cannot be held. And do you also notice that the clouds were never in the sky at all? In fact, both the clouds and the sky never meet! They are not connected in anyway except when seen afar.

What is “mine” then? The sense of belonging, of possession, mooted from the origin of I-ness, is something that is seldom explored. Because of its persistency in place, the “I” has been taken for granted and it is from it, sprung the world so to speak. When “I” is not fully understood and realised, “mine” comes to be. From “mine” arises ownership.

All mainstream faith has denounce I-ness as real, except an optical illusion of sort. Yet, this can only be spoken by those who have finally arrived in comprehending its true nature. It is not something for us to believe or even to follow. Doing so only makes the “mine” ever deeply entrenched into it.

The journey of awakening, or God, or whatever you called it, is not an overnight waking up. It takes skilful manoeuvring of a specific path given by those who have made it. Even that, it is severely dependable on how well the path has been articulated and conveyed for any pilgrim of faith to follow, else it can be misinterpreted in any way to suit each self-perception, making a deception out of it. The journey can be so near, yet so so far.