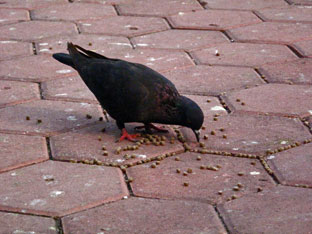 I was bestowed with smallness the other day. To be exact, it came on Saturday night when I suddenly felt I was not rightfully myself, and I found myself feeling uncomfortable, a clear contrast of what I was not just a moment ago before it happened. I could not put a finger to it, but I just knew it entered into my space. I woke up the next morning feeling a little depressed, probably a little useless too and it accelerated itself until late that night when I was supposed to work overnight for a rushed project. But I did not; I just give up and went to sleep at 2am, feeling terrible.

This morning upon waking up, it overwhelmed me some more with darn smallness when a guy whom I made prior appointment to meet this morning made me perceived him as trying to make me small. The mind was scheming every moment, not present to him, trying to get out from it, seeing him wrong in every moment. So strange how this mind is.

And thank God, the cloud started to thin later in the day and I became much myself again. This smallness came to me as a gift – which may sound strange to you – and of course, not when I am in it, not when the feeling of smallness was so real (of course it was!) and my job during that moment was to love it as much as I could, without trying to bring myself out of it (if only I could). And in that smallness, everything seemed bleak, terrible and insecure – and I was totally drowned and immersed in it. The story lines that come along with it made me feel even smaller. Worst, it told me how my past molded me into such. That’s the magic of illusion.  No wonder, Robert Scheinfeld, author of Busting Loose the Business Game calls it total immersion. And yes, on that note, I would strongly encourage you to read the book – he makes spiritualism fun and funny, at least to me.

And guess what, I got a gift after loving it, after coming out of it. It was a brief aha, a brief realization but a very revealing one – that when I feel great, in opposing to feeling small, it is just another camouflage of superiority, of having the ability to stand above all. What crap! Not to say both are right or wrong but it is simply a game of egoic stardom. Both at their very core are meaningless, and this is seeing them as neither real nor true, from the perspective of Spirit, or wisdom, as opposed to trying to label or distinguish them. The insight was pretty different from the level of taking integrity, or looking and resolving with what I am not authentic with. One of my beloved teachers tells me to forget all these stuff as they are ego in disguise luring me to keep searching and clearing – and when would it ever end? Instead, he asked me what is it that I wish to respond. And it is pretty paradoxical to be in the Now, as many spiritualist advocates. In the past I am advised to see what comes up in the now and face it. Yet on a new level, I am asked to see the now as unreal. Indeed a deepening of wisdom. It reminds me of what my meditation teacher said, first see it as a thought and later see it as a mind – both are different wisdom maturing.

What smallness does to me

And it dawned upon me how I try to get out of the smallness by engaging myself to share it with my beloved.  I am not saying that I should not open up myself for support to let me see the truth, but the motivation behind it was simply unwholesome. I came to see that my purpose of talking about my smallness is to get someone to buy into it, whereby when I am awake to myself, had a scheme of wanting to pass on that shit. If the person who listens to me is consciously awake as in wise, I can’t “throw” that stuff over to her. Her role position has to be merely from the space of perfect hearing and not even trying to resolve it for me by giving suggestions, as by doing so she has already deemed to see my issue as real and my smallness would have spread to her, unknowingly. And if I don’t get anything from her, I will subtly instigate her, and probably even make her upset or guilty for not supporting me or for not seeing where I am coming from. My ego job is just to stir her out of her presence and that would have done the perfect job of spreading the disease of smallness. Irrelevant whether she retaliates or buys into my story, for any reaction has already got the contagious spreading.

And if I find that she does not play my game, I move on manipulatively to look for another “victim”, speaking in tones that lures him or her into my den of smallness. And when I get him or her to buy into my stuff, I’d find a little relief from it, as if part of my shit is now out of my system. And just at the right time and right moment when the person starts to feel small, due to the contagion she has taken on, I’d find myself automatically out of that state and start to feel a little better. That is when I’d start to feel great again. But what is great except the game of passing on the baton of inferiority to superiority, to and fro, all the time, relating again and again?

Eckhart Tolle coined the word pain-body – as an egoic force that is contagious and anyone who is not awakened to his or her presence will easily get contaminated by it and the next moment, the game of finding a solution comes in, spreading and deepening the ego further. It is so obvious the meaning of life is just this – making myself aloof so that I don’t feel small – like crabs crawling all over each other, the fittest will stand above all, until another brings it down again. No matter how much integrity I have or how wise or responsible I am, luring behind it is this supremacy – the wanting not to be look down, and hence creating situations to make others small so as to defend myself from getting it, by the unconscious way I think, speak or act. To defend or to attack is already part of the ego equation. Have you experienced a passive defense, not to mention passive attack? When I feel I am right, already I am in defense which includes an attack. When I think I am wise, I am already having an equation of unwise – all for the sake of satisfying the ego. Whether I feel better or not – both are merely part of the equation of the ego. Any difference between being selfless and selfish?

Now I see from the point of view why my spiritual master seek that I stop teaching at this juncture. To teach is to see someone’s need and that is ego at work! And neither is it about not teaching. He is to mean that it is not about what I do but what I am motivated upon, and in my own words – ignorantly wise or wisely wise?

Once in the beginning there was uselessness
and one knows not
he wakes up one day and starts probing the reason behind it
and came to reclaim whatever power he gave to it
later it dawned upon him
that too is not true
as the hide and seek has to continue
so long as he continues to seek
he wakes up from another dream
one more time
and found meaninglessness in both
and in that awakened state
he triumph over all.